Brief reports on each of the competition days 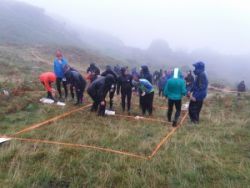 A day that will be remembered for the rain, pretty constant all day and despite being much needed to fill up the local reservoirs it was not so welcome for the runners.

Having reached the start you were however treated to some good challenging courses that judging from the feedback most enjoyed.

Special thanks must go to the start volunteers who spent more time out in the rain than most, many doing their "shift" getting cold and wet, before going out for their run.

Another thank you is due to the un-named competitor who spotted a lone runner in Langdale and brought them back to assembly, in time to stand the search teams down. 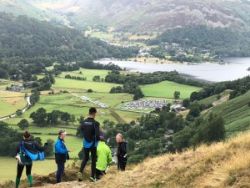 The weather was much kinder today, we at least had a chance to dry out between the showers. The worst of the rain came after all runners were off the hill and "only" the control collectors, planner and controller were still out, some after a very long day.

Angle Tarn is steep but mainly very runnable, which has resulted in many fast times across all classes. It also offers excellent views of Ullswater and the Patterdale valley.

Thanks to all competitors for their understanding today, and all helpers who made it happen. Andrea and Robin, the farmers whose land you parked on today, made another field available for parking which really helped, as one of the fields we planned to use had ducks swimming across it. 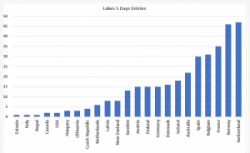 Whinlatter is a large area that gives planners the potential to offer the best of the forest and surrounding areas of fellside. The start was well placed to give most courses some of this variety, and the opportunity to see Bassenthwaite, Derwentwater and Westwards towards the coast. The finish was sheltered from the wind which after the last 2 days came as a relief for most. Our aplogies for the problems with the early buses, these were quickly sorted out.

A little analysis on the numbers coming to the Lakes 5 Days.

24 Countries are represented, the largest being the UK, but after that we have Norway and Switzerland with the biggest contingents. In terms of clubs, the largest non UK club is ASUB Orientation from Brussels, Belgium, followed by Montellano-O from near Seville, Spain.

Thank you to all visitors who have made the long, sometimes very long, trip to enjoy the Lakes 5 Days.

Have a look at the overall results to see where you are placed, and remember you can drop one score during the week. If you have had a bad day on days 1-3 you can still move up the results by have good runs at Askham Fell and Dale Park.

A complete contrast to Day 1 where we all got soaked. Askham Fell was basking in sun, as the sunburn will make obvious tomorrow. The courses took us to the best bits of the area, sometimes across tough ground but in the later stages very runnable short grass. It was a day for depressions, with people popping in and out of the very numerous examples across the area.The final twist in the courses was a tricky patch of gorse bushes right at the end which will have caught many people out.

If you want to see photos of the various days, one place to see them is the collection put together by Laurence Johnson 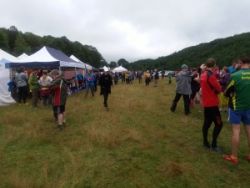 The final day saw some challenging middle distance courses in Dale park, one of the best parts of Graythwiate. The area is almost all wooded, with only a few clearings, some courses visited the dark coniferous forest which offered less wetness but less light to read the maps. All courses enjoyed the deciduous woodland with complicated crags and contours. Many people had costly mistakes.

Thanks on the day are due to the competitors who stopped to help the injured runner.

Thank you all for coming to the event, we feel it went well and we look forward to seeing you all again in 4 years time.

(A report from LOC (Lakeland Orienteering Club) who organised this event)

Another good Lakes 5 day urban, and we hope you all enjoyed your run around our town with Rob’s courses.

Thanks to everyone that made the trip and took part.  We all tried to make it enjoyable.  We apologise for the missing control and hope it didn’t spoil your run.  We decided to let the courses stand to include the legs in and out of the control as we attempted to maintain fairness and nobody lost a lot of time.  The alternative of voiding the courses affected was not in the spirit of the event, which was to offer a fun event.

A really nice event, with nice people who took part and good food at the end with views up to our Hoad and our lighthouse that is nowhere near the sea!!! but special.

The weather was improving as the week went on, so it wasn’t too rough.  We did actually order fine weather but got a little rain, we hope it didn’t bother you too much.

Many thanks to all who helped.